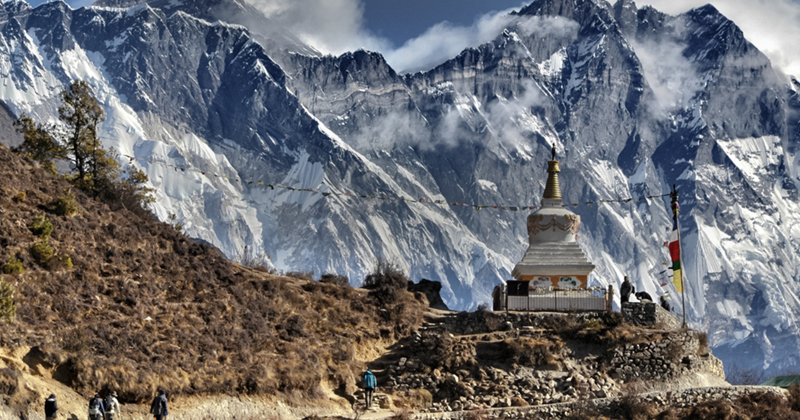 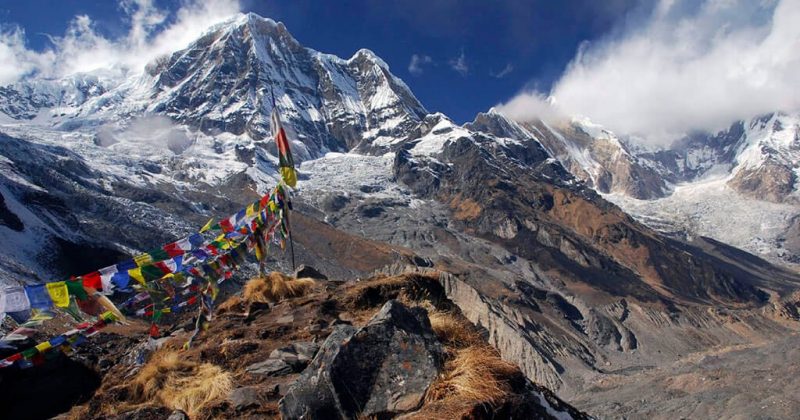 Day1: Arrival in Kathmandu Airport - (1360m.)
After your arrival at Tribhuvan International Airport, you will be warmly greeted by our office representative and transferred to the hotel.

Day2: Kathmandu Valley sightseeing
The capital city of Nepal, Kathmandu, being the historical and cultural heart of the country, is a popular destination for tourists, trekkers and other types of adventure seekers. The city is a marvelous amalgamation of Hinduism, Tibetan Buddhism and Western cultures influences. Paten and Bhaktapur are its two major neighboring cities. These two cities, like Kathmandu, have a rich historical, cultural and religious legacy which is reflected in the many temples, monuments and artifacts that they contain. You will be taken on a half-day guided tour of Kathmandu and Bhaktapur cities. In Kathmandu, you will be visiting Pashupatinath, the most famous and revered Hindu shrine in the country; Bouddhanath, the largest Buddhist stupa in Nepal, Swyambhunath, which contains both Buddhist and Hindu shrines and stands as testimony to the religious harmony that exists in the country; and the 15th-century 55-window palace in Bhaktapur. An orientation session for the trek, which commences the following day, will be organized in the evening.
Included meals: Breakfast

Day 3: Drive Kathmandu to Pokhara (910m) 6-7hrs
Early morning after breakfast, we drive to Pokhara from Kathmandu (208km) via Prithvi Highway, takes 6hrs approximately (option of flying from Kathmandu to Pokhara, takes extra cost). Along the way we will stop in scenic spots, for lunch and to get fresh as well, en-route you experience the countryside which is lays with greenery, rivers, local villages, farm lands and beautiful mountain scenarios. Upon on arrival in Pokhara you have a option of your own.
Included meals: Breakfast

Day 4: Pokhara to Ghandruk (1940m) via Birethati (1025m) 1.5hrs drive and 5-6hrs
After breakfast we from drive Pokhara to Birethati via Pokhara Baglung Highway (45km), takes about 1.5hrs. Birethati would the starting point of trekking to Ghandruk which will take around 5-6 hours. From Birethati, cross the metal bridge and at bank of the Modhi Khola registers at the ACAP check post. The trails heads north through the river bank following the rough dirt-road route then you follow the impressive stone paved trail climbing all the to Ghandruk village (1940m). This village is amazing example of stonework and worth spending a day over here exploring the local Gurung people in the heart of the Annapurna region. Enjoy the spectacular sunset views over the Annapurna ranges.
Included meals: Breakfast, Lunch, Dinner

Day 5 Ghandruk to Chomrong (2170m) 5-6hrs
With a tremendous view of landscape of Annapurna South (7219m), Himchuli (6644m) and Machhapurchhre Himal (6996m).we take an option of fast track route to Chomrong from Ghandruk. We will follow the most popular and fast trail options via Kot Dada and Kimrong. Once you leave the village we follow the trail of Tatopani. It is steep downhill to Kimrong village (1800m) and steep up trek which takes about one hour to reach to Taulang(2180m) and further one hour to reach to Chomrong village.
Included meals: Breakfast, Lunch, Dinner

Day 6: Chomrong to Himalaya (2920m) 4-5hrs
From Chomrong follow the trail left bank of the Chomrong Khola and some small terraces to Tilche (2010m/40min) then follow the Bamboo forest and reach to Sinwa(2360m). Continue through the oak and rhododendron forest and reach to Khuldighar (2540m) with few lodges and ACAP post. From here onwards section of the valley are affected by avalanche debris falling from the flanks of Hiunchuli, do not forget to ask the staffs at ACAP post whether the trail is clear & safe or not. Then you pass through Bamboo village (2310m), Dovan (2600m) and reach to Himalaya village exploring some slippery roads, dense forest and diverse landscape.
Included meals: Breakfast, Lunch, Dinner

Day 7: Himalaya to Machapuchhere Base Camp (3700m). 4-5hrs
Today, trail further continue climbing dense forest through Hinku cave (3170m) and Deurali 3230m), beyond that is another avalanche-prone area. Then you will see Two obvious rock pillars mark the ‘gateway to the century, which suddenly opens out to broad grassy slopes and a series of Mountain Lodges at Machhapuchre Base Camp (3700m). You might feel the effect of altitude here so it is good idea to rest and enjoy the views of the Machhapuchre, Mt. Hiunchuli, Gandharvachuli and Annapurna south range of rewarding experience.
Included meals: Breakfast, Lunch, Dinner

Day 8 Machhapuchre Base Camp to Annapurna Base Camp & explore the ABC (4130m) 3-4hrs
The trek from MBC to ABC is about 2-3 hours ascend. The vegetation disappears on our way to ABC and the path widens as we enter the Annapurna sanctuary. From here, we get sensational views of the near-vertical south face of Annapurna towering above us. The sanctuary boasts of a dynamic view without anything inhibiting the 360-degree panorama. From the base camp we again get to savor mesmerizing views of the Machhapuchhre, Annapurna south, Annapurna I, Hiunchuli and other peaks. You have option to explore the glacier at the Annapurna Base camp for couple of hours and explore the surrounding paces. There are few lodges at ABC where we will spend tonight.
Included meals: Breakfast, Lunch, Dinner

Day 9: ABC to Bamboo (2310m) 5-6hrs
Annapurna base camp is our ultimate destination of this trek. Now we descend back to Bamboo which will take about 6 hours. From the Annapurna base camp we retrace our steps downhill to Bamboo so it shouldn’t be very difficult. Furthermore, we will always have the rewarding extraordinary pleasant lively views and landscapes.
Included meals: Breakfast, Lunch, Dinner

Day 11: Landruk –Pothana (2890m)- Dhampus (1650m) – Phedi (1130m)3-4 hrs & drive to Pokhara: 45min
Now, the trail climbs gradual up about 2 hours to reach to Pothana (2890m). Enjoy the fine view of Mt. Fishtail and Annapurna to the north part. Descend from Pothana along the large ridge trail to Dhampus (1650m) takes about one hour. Then steep descend to Phedi (1130m) exploring the farmlands, local people in Dhampus area, takes about one hour, then drive about 45min to Pokhara city.
Included meals: Breakfast,  Dinner

Day 12: Drive Pokhara (910m) to Kathmandu (1310m) 6-7hrs
Early morning after breakfast, we drive to Kathmandu (208km) via Prithvi Highway, takes 6hrs approximately (option of flying from Pokhara to Kathmandu, takes extra cost). Along the way we will stop in scenic spots, for lunch and to get fresh as well, en-route you experience the countryside which is lays with greenery, rivers, local villages, farm lands and beautiful mountain scenarios. Upon on arrival in Kathmandu you have an option of your own.
Included meals: Breakfast,

The Annapurna Sanctuary trek offers you the Close up rewarding view of Mt Fishtail and Annapurna I, Annapurna III, Annapurna South, Dhaulagiri, Manasalu, Gandharvachuli, wonderful mountain atmosphere with magnificent views of surrounding peaks, relaxing hot springs, lush forest, greenery, rivers, villages, farm lands and beautiful mountain scenarios, fun-loving Gurung mountain village communities, and many more wonderful extension options if you have more time. Autumn (Sept to Nov) and Spring (March to May) are the best seasons for the Annapurna Base Camp Trek and the trek begins in Pokhara, one of the second largest city of Nepal further goes through Ghandruk, Chomrong, Himalaya,Machhapuchre Base Camp, ABC, Bamboo, Landruk and ends in Pokhara.

Need Help? Call us or drop a message. We will be in touch shortly. 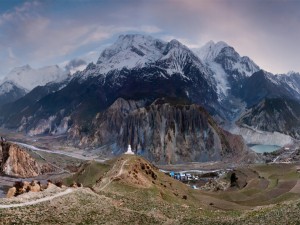 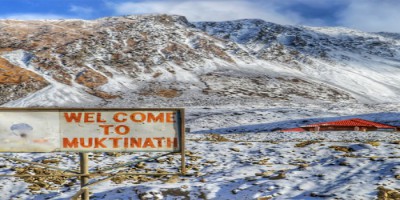 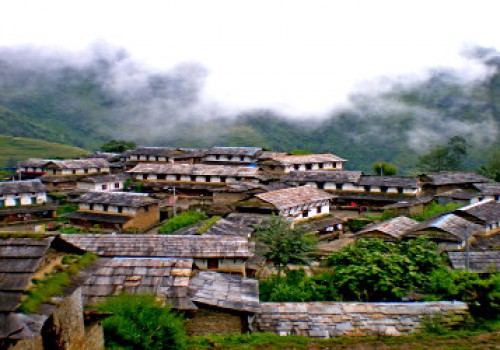 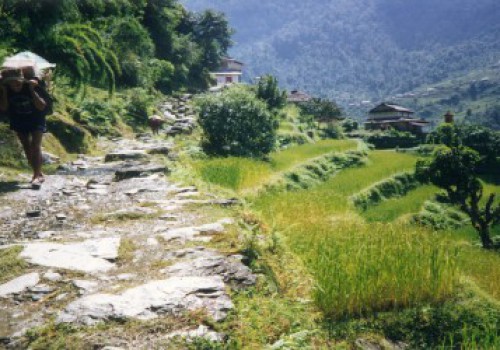 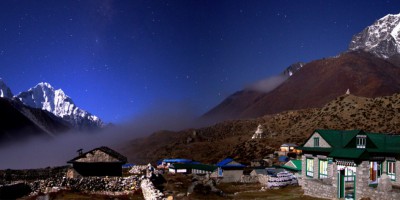